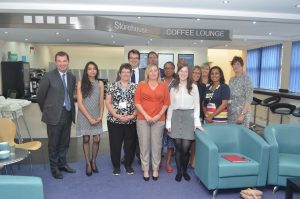 Nikki Saunders, Advice Service Manager and Lorraine Hume, Technical and Quality Supervisor (fourth and third from the left respectively) were invited by Mike Wood MP to attend a fact finding meeting with Guy Opperman MP the Under Secretary of State for Works and Pensions.

With other invited agencies, issues around Universal Credit were discussed and included:

The Under Secretary was very interested in the issues raised and took away with him a list of comments and suggestions for consideration.

As an organisation the meeting was very productive and gave us the opportunity raise issues directly with a member of the government and network with other agencies to make closer links.